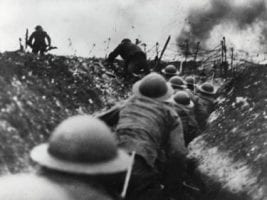 In this class, we will explore World War 1, World War 2, the Cold War, and the rise of new global “superpowers” in the 20th Century.  We will examine the causes of the First World War and how alliances between countries caused the first “global war”.  From there, we will look at how the after effects of World War 1 planted the seed that became World War 2.  From there we will look at the post World War 2 division of Germany, the creation of NATO and the Warsaw Pact and the effects of the Cold War.   This class is a combination of lecture and documentary video clips as well as discussion.

This class is a combination of lecture, documentary video clips as well as discussion.

There must be a minimum of 5 students to run this class.